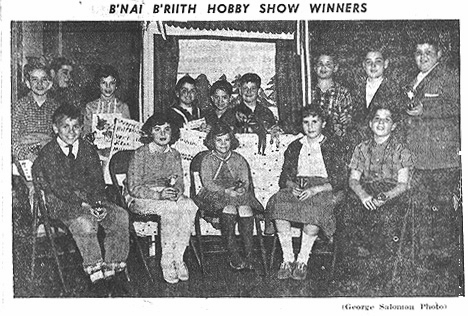 History of Writing -
The Puppet Show

My memories of the event are about as faded and dusty as the photo, but here goes my recollection...

The photo is from The South Shore Record, March 1958. That makes us 8 years old. The previous summer my parents had traveled to Europe, bringing back 4 hand puppets – a Prince, a Policeman, a Peasant Woman and a Devil. I remember playing endlessly with my new paper-mache treasures. Sometime in the winter The First Annual Five Towns Hobby Show was announced – to take place at my very own Temple Sons of Israel in Woodmere. I went to work, and as I recall actually hammered together the stage in our garage – with relatively minimal parental assistance, replete with working curtains. I painted the scenery, wrote the script and recruited Dickey and Ellis to come over, rehearse a bit and join the puppeteer troupe. On the appointed Sunday afternoon, my parents and I took the stage apart, somehow put the pieces in our car, and took it over to the Sons of Israel’s auditorium/gym.  We reassembled it and festooned the rickety stage with 4th of July buntings. Our venue was by far the largest structure in the show, centered in front of the proscenium. Its most charming feature I think was the off-kilter cardboard sheet with the credits scrawled all over it (you can see it peeking out just behind the girl in front of in the photo – reminiscent something you might see in an old “Our Gang” film or maybe today’s “South Park”). The sign lists all the credits separately with my name next to each one.

Since we were the only presentation that was an actual performance, we were able to command a large audience – fellow hobbyists and their friends, siblings and parents. Blithely we began; I have no memory of the story-line at all. When the curtain closed, we received tumultuous and enthusiastic applause. And then a problem occurred. It seemed we had not mastered the concept of the “Curtain Call” – simply standing up and taking a bow. So as the curtains remained shut, the applause died away. And since there was no curtain call, the audience quietly waited for the second act. Of course, there was no second act. Slowly it began – murmurings, then clapping and shouts for the next act. I definitely remember us huddling in the shadows beneath our little stage wondering what to do. I acted quickly, pulled the cord and opened the curtains and desperately improvised a second act. Of course, it was disastrous, quickly petering out to a whimper. We closed the curtains and again hid underneath the stage, not acknowledging the end of the show or coming up for a bow. The tepid applause faded away and the dispirited audience wandered off.

Still somehow (and admittedly this part of the story may be self-delusional), we won the grand prize, receiving with all the kids in the photo a faux-gold patina plastic trophy cup. And as you see, the newspaper’s photographer gathered the winners around our stage for the photo.

Thus the tale is told – mostly true, I would wager.