Dr. Henry Brem is honored for Clinical Excellence at The National Physician of the Year Awards

Dr. Henry Brem has transformed the field of Neurosurgery, leading to breakthrough treatments that have extended the lives of brain cancer patients worldwide.

Henry Brem grew up in Northern New Jersey, attending the high school at Yeshiva University in Manhattan. He received his undergraduate degree from New York University, his medical degree from Harvard, and trained in neurosurgery Columbia University, College of Physicians & Surgeons.He joined the staff at John Hopkins in 1984.

Dr. Brem changed the surgical treatment of brain tumors by introducing new approaches for targeted therapy. He developed new classes of polymers and microchips for drug delivery that are custom-made for the agent being developed. He then designed and led the clinical trials demonstrating their safety and efficacy. These were the first new treatments for brain tumors that the FDA had approved in 23 years. Commercially known as Gliadel wafers, this therapy is now used worldwide to intraoperatively deliver chemotherapy directly to the sites of brain tumors.

Dr. Brem also carried out the pivotal clinical study that introduced navigational imaging into the neurosurgical suite. His work led to the FDA’s approval of the first image guidance computer system for operating on tumors within the brain.

As director of the Department of Neurosurgery and Neurosurgeon-in-Chief at Johns Hopkins, he has built one of the largest brain tumor research and treatment centers in the world, training numerous researchers who have revolutionized the fields of intraoperative imaging, angiogenesis, immunotherapy, and controlled release polymers for drug delivery to the brain.

Dr. Brem sees his career in medicine as a moral imperative — to provide the best clinical care, while pushing research boundaries to enhance patient’s outcomes in the field of neurosurgery. His work is in large part responsible for almost doubling the life expectancy and quality of life brain cancer patients.

He foresees a time when brain cancer will no longer be a life threatening disease, but become a manageable condition. 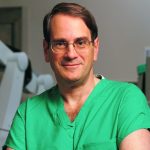 Every time I interview a physician I try to establish a connection – a common bond from which we can begin the conversation. With Dr. Henry Brem I mentioned that my father had died of a brain tumor. My father died many years ago, so my comment was not an expression of immediate pain or sorrow, just a statement from which to seek some rapport.

It was Dr. Brem’s response that was surprising. There was a moment of silence. And then he said softly, yet so clearly: “I’m sorry.” Now it was my turn to pause. His voice and manner were so sincere that I could not doubt the authenticity of what he said and felt. And this from a physician who has probably spoken to literally hundreds of family members whose loved one may have died. I knew instinctively, though, that somehow he demonstrates the same depth of compassion to every one of his patients and family members. It is the part of the majesty of any great oncologist – the ability to confront and mitigate our most human of responses to mortality.

From this opening moment, our conversation only deepened. Of course, we discussed the minutia of a career, but underlying that conversation was another thread that was deeply philosophical. Dr. Brem recounted his own childhood – and how being the child of Holocaust survivors he inherited a “moral imperative”, not only to value each and every life, but to do what one can, when one can, to help others live.

Moral Imperative. How does a neuro-surgeon imbue such a concept – not only to articulate the principle but to live it? Besides his family legacy, another part of the answer may lie in the years he spent at the Yeshiva University High School in Washington Heights in upper Manhattan. There is where he may have encountered the great Talmudic scholars and thinkers. The Talmud explores at length the ethical-legal duties of the innocent bystander, who happens to find himself in the presence of a person in peril. This famous passage from the Code of Maimonides may best encapsulate the concept:

Let us remember that Maimonides (1135-1204) was himself a physician – who no doubt struggled with the very same mortal realities as does every modern physician, including Henry Brem. It is a confrontation that every physician who sees death first hand – both modern and ancient – must deal with. Either they must shut themselves off emotionally and act as a consummate professional or they open their heart to every patient. I suspect there really is no in between.

Beyond his breakthrough in brain cancer work detailed above, Dr. Brem also worked as a young man in the fabled laboratory of Dr. Judah Folkman at Harvard. In our conversations, he described at length some his important insights that helped lay the foundational work in angiogenesis – one of the most interesting and potentially fruitful areas in cancer medicine and treatment.

Yet underlying all these myriad accomplishments, there is that impelling force that energized the research, the late hours in the laboratory, pushing boundaries, recruiting physicians, establishing clinical trials. Daring explorations — all to follow a moral imperative – set early in life: What it is to help another person – in ways heretofore unimaginable.

The first time I first spoke with Dr. Brem, I had just finished reading Viktor Frankl’s classic memoir “Man’s Search for Meaning.” Frankl’s book is a first-person account of his own internment in Auschwitz. As a psychiatrist, he detailed the difference between those who were destined to survive and those who did not. Those whose life had meaning – no matter what it was – had the far better chance of surviving the nightmare. Suggesting that a happy life is secondary to a life of meaning — that we all share a human yearning for a heartfelt purpose as to why one should live.

It seems to me that Dr. Brem’s life is a showcase of how a single principle, however one may choose to articulate it, can make a life flower – and in turn impact for the better all those around him – patients, colleagues, friends, as well as family.